The Courage to be Authentic

I entered this profession in 1991 at a time when it was progressive enough that women in policing had already secured a place, but not progressive enough that women held leadership positions.  In my state, we were accepted into the thin blue line but we would maintain our positions within that line for awhile and not out in front leading the line.
By the very nature of human adaptation, we sought to “fit in” so much so that we bartered away our uniqueness for a place at the table.  When I was a brand new police officer, I acted the way I thought I was supposed act and I emulated those around me.
This was a stretch from the person I actually was.  I was a chubby kid throughout my childhood and I’m kinda grateful for my parent’s lack of knowledge about nutrition because with every slice of pizza I shoved into my face, I learned to be funny to compensate for my husky waistline.   The summer before my senior year of high school, I discovered exercise and health and lost the weight.  But I was still funny.  I was voted “Class Clown” by my fellow classmates because I had mastered quick-wit and humor as a way to draw others in.  I was usually the loudest person in the room, and quite frankly, I don’t know how to be any other way.
So when I fulfilled my dream of becoming a cop, I stifled that part of me and applied my proverbial mask that I dubbed my “street personality”.  My small stature magnified my insecurity so I overcompensated by being over the top. 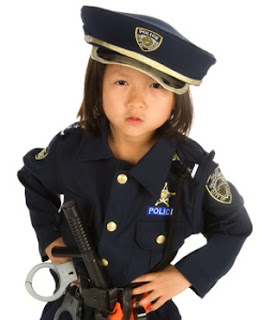 I used to believe that this phenomenon was exclusive to women but I’ve since realized that it is not gender-specific.  We all spend much of our time watching social cues and emulating others so we don’t stand out too much.  We are innately designed so that we adapt to our environment.

For the first year on the job, I was a poser.  I pretended to be tough and I talked a big game.  That is, until a criminal-type ran from me on a traffic stop.  I got a much needed lesson that my skills and stature were nothing against a 6’3’” muscle-man.  I gave chase but failed to consider my gift of being pretty fast when I needed to be.  As the gap between he and I was closing, I recall having the semi-conscious thought: “What am I going to do when I catch him?”
So I formulated a plan to to pounce and tackle him to the ground, then cuff him.  I got within 3 feet and sprung on him with Tigger agility and grabbed his shoulders.
But.he.didn’t.fall.  His footing wasn’t in the least bit affected by my acrobatic feat.
I didn’t have a “plan B” because it never occurred to me that my “plan A” would be thwarted by physics.  I never made a conscious decision to hang on to him – it just happened.  So as I was riding this guy’s back through the backyards  of a neighborhood on the east side of Aurora, my “tough guy” act fell away and I said to him:
“We both know you could really hurt me if you wanted to.  But you won’t — because it won’t increase your street cred given my obvious proportion.  And it certainly won’t help my reputation among my fellow officers.  So let’s just end this and I’ll arrest you for your warrants which is inevitable sooner or later anyway.  I won’t charge you with fleeing and we’ll call it a day.”
He stopped.  Just like that, he stopped abruptly.  I slid down his back and handcuffed him with no issue whatsoever.
He said, “Ma’am, no one has ever been real with me like that.”
He also said, “You dropped something back there” which turned out to be my radio that had bounced out of it’s holder.  So we walked together and he showed me where I dropped it (no kidding).  I picked it up and said in my most confident voice over the air, “Subject in custody”.
I ran into that guy many times throughout my career and he never gave me a problem.  He gave other cops a problem — but not me.
After that incident, I started being me.  I brought MY personality to my job and I started making great successes.  I learned that when you treat people with dignity and respect and never look down on them (even when they are literally laying in the gutter), they will cooperate and even help you.
I was a successful police officer because I stopped trying to be what I believed I was supposed to be and started being authentic.  I diffused situations with humor and I didn’t withhold compassion like I thought I was supposed to do.  I was me.
Then I got promoted to sergeant and the same thing happened again.  I started acting the way my bosses over the years acted because I thought that was how authority was supposed to look.  Fortunately, I was conscious of it and I forced myself to remember the lesson I learned 9 years earlier.
It’s a struggle to go against the “norm” and it’s much easier to attempt to live in the contrived notion of what others believe a Chief, a Captain, a Lieutenant, a President, a Board Member (insert any title here)
Whose template are we trying to fit?  We should be more concerned with results.  Are we getting the job done?  That should be the litmus test and should matter more than anything else.  What’s wrong with adding personality to the process?  When it’s time to put our game faces on, we always do.
It’s so counter-intuitive but the fact is that when we start using the skills and the gifts that are unique to us (humor, passion, compassion, creativity) — when we begin being more of who we really are — this authenticity makes us better at leading people.  It does so because we aren’t borrowing power from our position.  It does so because we don’t have to try and remember to be a different person at work.  Humans aren’t built to compartmentalize the different facets of our lives.  I’m always astounded when people tell me they are a different person at home than they are at work.  That must be exhausting to try and remember who to be based on where you are! 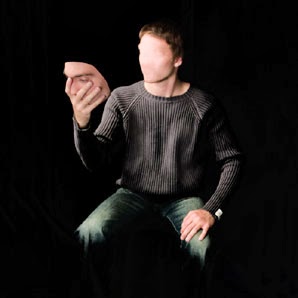 I know what stops us from being who we really are.  We are worried what will “THEY” will think.  What will EVERYONE think?
The best moment of my life came after I finally asked myself, “Who is this THEY that I’m so worried about and why do I give them so much power?”  The answer is actually really simple.  I keep a list of the “they’s” in my life whose opinion really matters to me.  I call them my “Personal Board of Directors” and they are comprised of my family, friends, and mentors with strong values and high expectations of me.   When I begin to worry or the criticism starts to get to me, I refer to my list and as long as I’m doing right by them, the noise falls away.
If there is a time where I know that my “THEY” would not be proud, I know that I have to make some changes.
And if you find yourself on the other side as one of the critics or the one who stands in judgment, stop.  Check yourself.  Be introspective enough to question your own judgments of others and instead of criticizing, seek understanding.  I have found that my biggest critics are usually people who don’t even know me.
You are never going to satisfy all the critics (especially the higher you ascend in an organization).  That’s okay — that’s where COURAGE comes in.  You could be the ripest, juiciest apple in the world, and there’s going to be someone out there who hates apples.
There are those moments when I struggle and am tempted to fall prey to the criticism that suggests I don’t act (or even look) “Commanderly”.  And then I think of the men and women in my department and the results they produce and the relationships I have with them that are based on mutual respect and I realize I’m doing something right.  I’ve gotten this far in my career by being me and I’m proud of that.  And I’m not going to change to fit someone else’s template.
We all need to find the courage to be authentic and even vulnerable at times.  Vulnerability is not for the weak — it’s for the strong.  It takes courage to stand out because it’s much easier (and safer) to fit in.
You will have critics and people will judge you but as long as you are right with the “they” in your life and as long as you are doing the right thing, for the right reasons, and at the right time, you should be YOU as much as you possibly can.
Media Appearances