Lessons from the Boxing Ring

I got my @$$ handed to me in the boxing ring.  Forgive the vulgarity, but it is the only way to adequately describe what occurred.

When a sergeant from my department asked me if I would be interested in participating in an exhibition boxing match for charity against a female commander from another jurisdiction, I happily agreed.  The words “charity” and “exhibition” drowned out the words “boxing match” in my head.  I was expecting oversized clown gloves and putting on a fun show for the crowd.  I couldn’t have been more wrong.

I heard much trash talking from the other side of the county but I really thought it was just hype to generate ticket sales for the event.

Since I’d never boxed before, I sought out a boxer, MMA fighter and overall “badass” to help me with some basics so I would, at the very least, punch and move properly.  In hindsight, I should have trained much earlier than 2 weeks out because my opponent was doing just that. 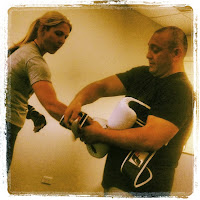 When I stepped into that ring, I was prepared to entertain the crowd.  When she threw the first punch into my face, I knew it wasn’t for fun.  Everyone has a plan until they get punched in the face, right?  I don’t remember much from my bout.  In fact, my trainer was apparently screaming from my corner telling me to “get out” and “block” and I can honestly say I didn’t hear a word.  I never felt pain, either.  I could see her fists coming at my face and I knew she was making contact, but it didn’t hurt at all in the moment.  That’s the beauty of adrenaline.

I’ve been fortunate enough to be able to talk myself out of a lot of fights over the course of my career.  For the ones I couldn’t, the scenario always ended the same way:  the bad guy ended up in handcuffs.  If I started alone in a fight, I knew there were more of my brothers and sisters in blue on the way to assist.  In the ring, I couldn’t call for back up.  At one point, she hit me so hard that I reverted back to my police training and I instinctively turned to find cover.  In a ring, there is nowhere to go but back into the fight.

I held my own.  I stayed on my feet.  I endured 3 rounds.  I lost by majority decision.  But I learned a few things for which I am grateful.

The first of which is to be prepared.  I think if I’d have taken this bout as serious as my opponent, I might have prevailed in at least one of the rounds.  I have no one to blame but myself for making the assumption that this was a game.  Those who prepare don’t need luck.  They win because they put in the time on the front end so they are ready for the moment. 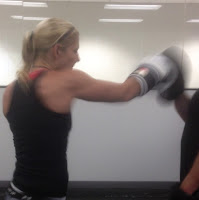 This isn’t as much about boxing as it is about life.  For police officers, you can never know when you will find yourself in a dark alley with a bad guy who is ready to sacrifice it all to get away and hurt you in the process.  You must train for those moments where life meets circumstance.  Train for the unpredictable so you get to control the outcome.  Those who are unprepared will find themselves wishing they’d have trained harder for the fight that really matters – if they live to tell about it.

For those who don’t face criminals in dark alleys, life it still about preparation.  It’s about committing yourself to constant self improvement.  Take the classes you’ve been putting off, read the book that will make you better at what you do, start training your body.  Take on a new challenge that moves you out of your comfort zone because when you come out on the other side, you will be better.  Never miss an opportunity to improve yourself because you can never know when it will pay off.

That was my second lesson.  I had never boxed before and as the fight grew near, I was legitimately terrified.  But I committed to the event and I asked myself the question I ask every time I get nervous about an upcoming challenge:  “What is the worst thing that could happen?”  I came up with the following answers:  I could lose.  I could get publicly humiliated in the process.  I could actually get hurt.

The funny part is that getting hurt played the least part in the equation.  I’m not sure why but I’m not scared of getting injured or being in pain.  I’ve endured pain before and I know it’s temporary.  I wasn’t even particularly worried about losing.  I knew going into this bout that my opponent was bigger and stronger and thus, I had no delusions or false confidence.  So public humiliation was the only lingering barrier and I figured I could live with that!  Once I formulated the answers to the questions and accepted the worst case scenario, I was able to move forward.

I stepped far outside my comfort zone and in the moment, it really sucked.  I wanted to revert back to my safe place.  But I’m glad I stayed in and endured.  And now that I’m on the other side, I’m better for having done it.  Even with the loss and the humiliation.  I’m better because I tried.

I couldn’t give up because it would render pointless every lesson I’ve ever taught my children about failure and resilience.  Much of life is showing up and if you end up taking a beating, that’s okay as long as you get up again.  It’s about perseverance and staying in the fight.

And finally, I learned that the people in your corner are the ones who matter most of all.

The actual fight is a blur to me but one thing I do recall is looking out to see the faces of my friends and family cheering me on.  The ones who showed up are the ones who will still be there without a winning title and when the rest of the crowd goes away, they’re still in my corner.  They don’t make trophies for that.
Media Appearances