Boredom, School and the Prefrontal Cortex

*Published in the Sun-Times Beacon News on August 19, 2013
Every school year, my kids count down the days until summer vacation.  Once it arrives, the jovial occasion is met with roasting marshmallows over a bonfire started with kindling made up of old school folders and papers.
The bellowing smoke is symbolic of another year rising and slowing dissipating into the past with excitement for a long summer ahead.   They fill themselves with s ’mores, stay up too late, sleep in too long, and all is right with the world— until about 6 days into summer vacation when my phone rings at work and I hear “we’re bored” on the other end.
The word “bored” is forbidden in my house.  Boredom is an emotional state experienced when an individual is left without anything in particular to do, and not interested in their surroundings.  But how can that even be?  We live in a great, big, vast world and the possibilities to occupy our time and our minds are endless.  If you are suffering from boredom, you are suffering from a failure of imagination.  But I digress.  This column is not about boredom.
After the camps are done and the woodpile for the bonfire has dwindled, there is no fighting the inevitable – the start of the new school year is just around the corner.  Boredom (I’ll allow the word in my own column) has actually created anticipation for a new beginning. My kids will never admit it, but they secretly crave the routine and order that happens when school begins.   Or maybe it’s just me.
The backpacks are bursting at the seams with school supplies and the new shoes are still clean and pristine as they head off to school with nervous excitement.  They wave you a goodbye and the world returns to its natural order.
You head off to work with coffee in your hand and what?  Look at the time!  You are running late to work and of course the inevitable happens.  You are stuck behind one of the MILLION big, yellow school buses that seem to be EVERYWHERE.
No worries.  You’ll just gently pass on the right and scoot around it before it puts out that big, red stop sign arm so you inch up and… NO!  Pow!  There’s the stop sign.  You know you aren’t supposed to pass a school bus because it’s super illegal but you strongly consider it.  Fortunately, your clear head prevails and you recognize that the laws are in place to protect younger children who often have limited experience with traffic and lack the skills to negotiate it safely. 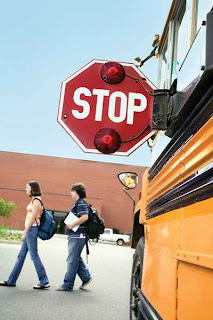 As a motorist, you remind yourself that you need to take special care while driving during school hours.  (Please note that I’m giving you the actual script that should go on in your head as this occurs so I’ve done all the work for you.)  Since you are a logical and calm human being, you simply plan to leave a tad earlier from now on so you don’t have to even consider passing a school bus that is loading precious, miniature human beings.

And while you are being so logical, don’t forget to respect those vest-wearing crossing guards who make you stop so the miniature humans can cross the street.  They get paid peanuts (and not even good ones like macadamia nuts) to keep your kids safe while putting their own safety in jeopardy.
Above all, remember to be patient.  The school speed zones are there for a reason.  The part of our brain called the prefrontal cortex is responsible for reasoning and decision-making.  It isn’t fully developed until we are in our mid-twenties so the kids on their way to school are too young to safely circumvent the sea of vehicles surrounding roads at their schools. They have an excuse to lack common sense.  We don’t.
Now go have a great school year.  Only 286 days until summer vacation!
Media Appearances